LCW15 is here! A week of discount cocktails, the hottest bars, the coolest pop-ups, the biggest parties – and several one-time events for your liver to look forward to (think of it as a work out).

On Friday, Highball Hoodoo released London Cocktail Week 2015 Guide for must-do events in the city, and one of them, the Buffalo Bourbon Empire, gave the Hoodooist a sneak peak to what they are offering this week at their 1 Kingsland Road pop-up in Shoreditch!

LCW regulars Buffalo Trace Bourbon are back with their Empire pop-up!

Whether you’re learning how to make your favourite cocktails, watching the hilarious comedy duo ‘The Thinking Drinkers’ or just sitting back and relaxing with some sublime drinks, there is a little bit of something for everyone. And as if that’s not enough, you could be among the first to sample this year’s highly anticipated Antique Collection – a Collection that has been bestowed with some of the highest accolades the spirits world has to offer.

With a selection of events through the week, check out their to-do list!

You’ll notice that the tasting of the much-anticipated Antique Collection (released every year by Buffalo Trace) is nearly every day of the week, but remember that you have to book a spot for the tasting! If you can, make sure you can get a tasting led by Buffalo Trace Master Blender himself, the fantastic Drew Mayville! Who else to help you understand the complexities of their finest whiskies than the man responsible? 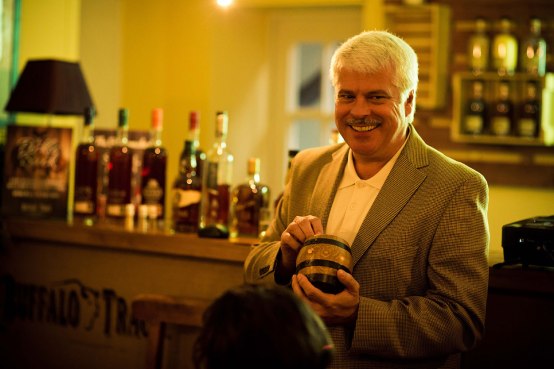 A wonderful host, Drew runs participants through some of the most awarded whiskies in the world:

Beginning with the classic Buffalo Trace – we all know the Hoodooist loves this one – that classic spicy-sweet caramel nose, the palate richly oaky with brown sugar, toffee and tiny hints of espresso followed by a cinnamon finish.

Moving on to the Eagle Rare 17yr, the Hoodooist’s favourite of the night – the nose initially has a wine-barrel hit, but is immediately followed by a wave of almond (like a sweet almond cream). The palate is a gorgeous combo of tobacco and leather, with the oak’s vanilla. A long finish of leather and toffee follows.

The Sazerac 18 straight rye is much smoother and lighter, the palate feels a lot like a julep has been reduced into whiskey form. An allspice nose is followed by a palate of cinnamon, mint, eucalyptus, and a very long, warm finish of white pepper. 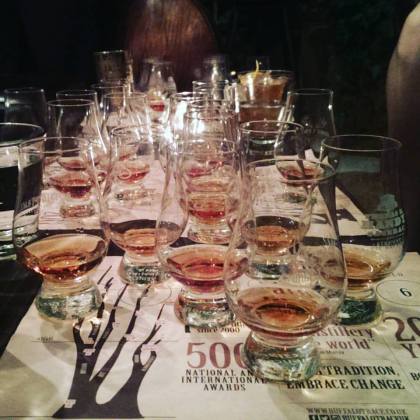 The William Larue Weller won Jim Murray’s Whisky Bible Best Bourbon in the World 2015! Very understandably – the nose is full on tobacco, leather, and a fruit sweetness. The palate brings in the marshmallows and figs and dates. A wonderfully smooth, sweet finish.

The Thomas H. Handy won World’s Best American Whiskey at the World Whiskies Awards 2015! This is lush. A bold nose ushers in a palate of winter sweetness with the fig cakes and toffee, cinnamon and clove, ending on slightly more Caribbean flavours of allspice, nutmeg and coconut.

The tasting ends with the George T. Stagg‘s unrelenting cavalcade of sweetness, from the dark chocolate, molasses and fudge, to berries, dates, a hints of tobacco and coffee. A beautiful dram. 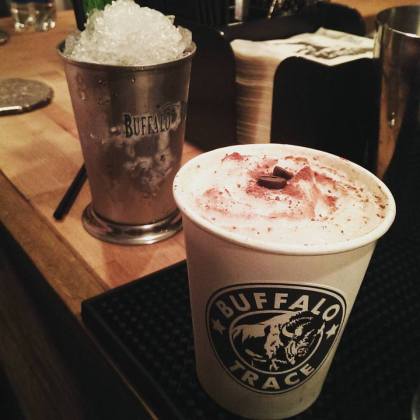 Cocktails at the Buffalo Bourbon Empire include the Don’t Mug Yourself: Buffalo with Caffe Borghetti Coffee Liqueur, fresh espresso, topped with a bourbon biscuit puree for a fantastic Espresso Martini twist. Sweet, but not overbearingly so, not thick or viscous, but not exceedingly watery (all worrying threats of Espresso Martini), the Don’t Mug Yourself could easily be one of the best offerings of the night.

The No More Mist-of Spiced Rye (mouthful, that) brings Buffalo with Carpano Classico vermouth, Fernet Branca and a mist of spiced Sazerac Rye. Now, when sipped, I really enjoy the introduction of the drink, however the Fernet could be taken down a bit, the herbal notes can overpower the Buffalo Trace. 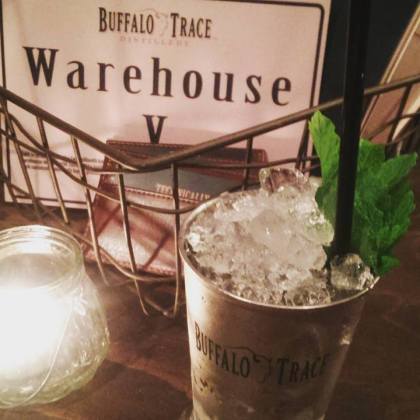 Whiskey classics are also served up – you can’t go wrong with an Eagle Old Fashioned, and – as is ritual at every year’s London Cocktail Week Buffalo Trace pop up – find yourself some of those beautiful Picklebacks to help you through the night!

Service is impeccable, the Buffalo Trace team are wonderful, the live music gives great vibes. The Buffalo does it again!

Remember to make your bookings for the tastings! It’s a crime to miss.

LCW is here! Remember to check out Highball Hoodoo every morning of London Cocktail Week for more reviews of the LCW cocktail offerings, parties and events!

Get #YourDailyDoseOfHoodoo each morning from 5th to 11th October!
*Tune in tomorrow for our coverage of The Whisky Show, The Cocktail Village and the City!* 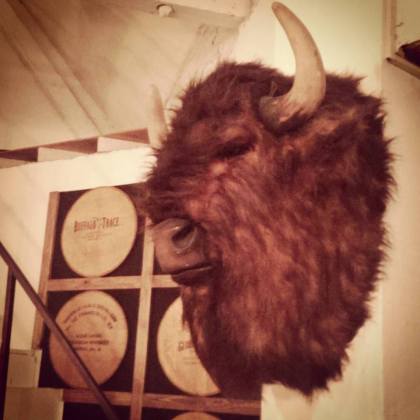