Welcome one and all to the recap of the first day of London Cocktail Week 2016! Wield a red or white wristband and enjoy the discounts/events that LCW has to offer!

This year the Hoodooist will be bringing you #YourDailyDoseOfHoodoo, a daily review of each day of London Cocktail Week ’16.

Today we look at October 4th: Where the Hoodooist tackled Soho!

We got to admit, everyone’s upped their game. This might be the first time the Hoodooist enjoyed every single drink he drank. Hell.

Jinjuu’s Korean Sip n Snack was perfect to start the afternoon after the Whisky Show the night before!

14 pounds gets you a plate of fried chicken with a pair of delicious Jinjuu sauces, and cocktail:

The Kimchi Bloody Mary fancies up the classic hair of the dog with kimchi, sriracha sauce, celery and black pepper infused soju, topped up with fresh tomato juice. Tall and spicy, the cocktail is light, beginning with the salty-sour kimchi juice, immediately moving to the spicy sriracha, finally ending with notes of black pepper soju, all the while riding a wave of tomato juice. Needed that.

A short walk away, we’re down at MASH!

Everyone knows the Hoodooist loves MASH.

Steve and the boys in this subterranean hideaway do love their Buffalo Trace, and this year they’re going to Punch the Buffalo, by mixing up Buffalo Trace Bourbon, La Concha sherry, lemon juice, maple syrup and cardamom bitters.

Reasons to love this drink: You taste every single flavour in perfect harmony. No confusion, no ingredient trying to outperform the others. First the initial sweetness of wheat from the bourbon, followed by the maple’s own unique sweetness. After the sherry’s dryness and cardamom that lifts it up, ending with the bourbon’s vanilla length. Spectacular job. 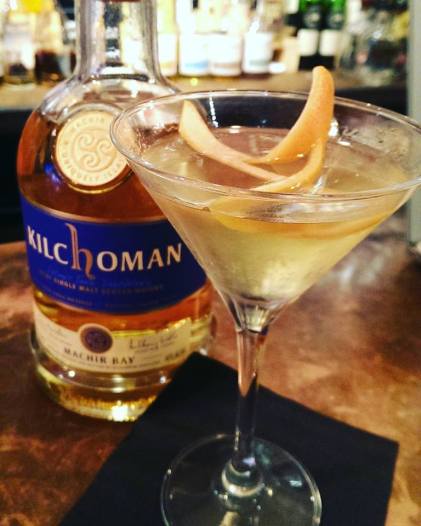 Milroy’s of Soho’s Hebrides and Ivory

And here we are at Milroy’s of Soho!

A whisky lover’s home away from home, MoS is not kidding around with this year’s offering. Short, heavy, uncompromising.

The Hebrides and Ivory (yes, ouch) does…harmonise fantastically (sorry). Truly, this drink immediately screams out to me with the unique mix of Kilchoman Machir Bay scotch, Dolin Coeur de Genepi, St. Germain elderflower liqueur, and hopped grapefruit bitters. This almost velvety cocktail is strong as all hell. Just the way I like it.

Take your time with a book and the shop’s puppy while sipping this, beginning with hints of grapefruit and the powerfully nutty and peaty whisky – sweet and medicinal – the flavours give way to the elderflower that manages to not be cloying. The wormwood (light and fragrant) comes in next, balancing the flavours, ending on a short length of more grapefruit.

If you are not familiar with Dolin’s Coeur de Genepi, it’s because this bar pretty much bought the UK’s entire stock. Highly recommend trying this cocktail to become acquainted with it! 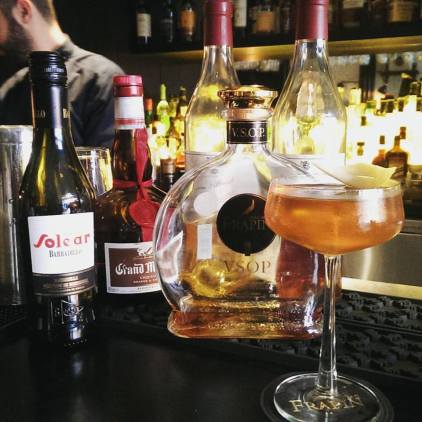 Tredwell’s A Feather in the Cap!

Walking down closer to Covent Garden, the Hoodooist finds himself at Tredwell’s Saint Martin’s Lane for the Feather in the Cap!

Frapin VSOP cognac meets apricot and fig liqueur, manzanilla sherry and Grand Marnier. This rather viscous cocktail unfortunately tends to drown out the fruity spiciness of the cognac a bit, but nothing a little bit of alteration with the liqueurs can’t solve!

The initial cognac hit moves into the lightness of the sherry, then to the apricot – ending on a length of figs and Grand Marnier. For the sweeter tooth, this is a wonderful cocktail timed with the fig season.

The last stop of the night was the most surprising – and might be for the rest of the week!

Recently opened Talli Joe just won their first Michelin Star only days ago, and by the looks of this cocktail, they well deserve it.

I had no idea what to expect here. And it was wonderful. Turmeric begins and releases the intense spice of the biryani oil, followed by honey. Rum and tonic make their entrace, ending with the biryani spice. It is far more approachable than it might sound, and is a must-try this London Cocktail Week!

This day in Soho has served up a lot of unique and successful cocktails: Jinjuu gave us salty and sour – it’s spice also showing up with Talli Joe‘s unique concoction. Whiskey shows us it’s versatility with the sweeter production by MASH and the smoky challenger from Milroy’s. Finally, sweetness is not ignored by Tredwell’s seasonal cocktail.

Alright! That’s our recap of Soho of London Cocktail Week 2016! I do hope it may have helped you one way or the other, dear readers, on our quest through the most magical week of the year.

Remember to check out Highball Hoodoo every morning of London Cocktail Week for more reviews of the LCW cocktail offerings, parties and events!

Get #YourDailyDoseOfHoodoo each morning from 4th to 9th October!