The Great Northern Hotel is home to three separate bars, two being intimate and snug, and then the more open, group oriented GNH Bar.

A few table oriented around the central bar under two enormous crystal chandeliers and a mirrored ceiling, the bar is certainly attractive, but also somehow repetitive in terms of style – a danger hotel bars across the city need to be careful of. We all know that ‘hotel bar’ look.

Service was generally attentive, but our first issue was asking about the ‘Afternoon Jaunt’ (a 2-for-1 cocktail deal for Saturdays 2PM-7PM), which they then told us was for a limited time only; until we pointed out it was still on their website. As of 14th Sept ‘14, their website still advertises their offer. But the good-natured staff decided to go ahead and offer the 2 for 1 anyway.

The style of drinks is also distinctly ‘hotel’. We began with the Japanese Negroni, Nikka Japanese whisky with Aperol and Antica Formula is an interesting twist on the Negroni, but I must argue is more of an Italian twist on a Manhattan in terms of flavour. A relaxed drink that may not be a spectacle, but a decent drink nonetheless.

Finally, the Old Chilli Monkey. I was really excited for this one. Oh my. Monkey Shoulder whiskey, home-made chilli and cinnamon syrup, Angostura and Rhubarb bitters. At first sip, two of us looked at each other thinking “Well, nice and spicy” until the burning started.
Mind you, we grew up on spice. But if after one sip your lips still feel that they’re hideously chapped with someone rubbing chilli powder into them for 10 minutes; YOU’VE GONE WRONG.
The drink could only be finished with a straw, even then, carefully. 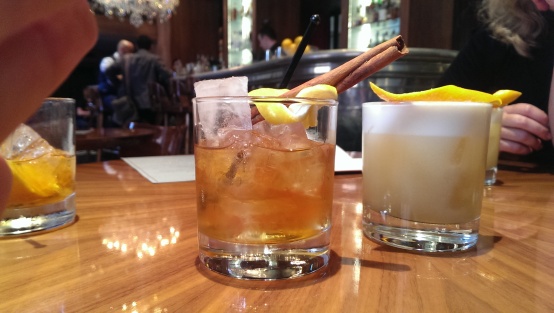 The GNH Bar wants to appear experimental – except it is failing at it, I feel like classic cocktails it should stick to. The halfway decent Japanese Negroni is somewhat reliable with its almost classic quality; but the following drinks were a mess.  Imbalanced, and made with almost an amateurish excitement – paired with the initial advertising debacle, I can’t see myself returning to the GNH Bar soon, but look forward to the other bars and restaurants the hotel has to offer.

Drinks: ** (Ought to get * for value for money, but the Japanese Negroni favours)
Atmosphere: ***
Service: ***