Welcome to Baijiu Cocktail Week 2015!
Every Chinese New Year, for one week, the ‘white spirit’ takes over London to test London’s bartenders with a spirit the city isn’t that familiar with – and this beginning of the Year of the Goat isn’t different.

From the 13th to 22nd of Feb 2015: 9 venues across London, 9 different cocktails, 6 of which will be reviewed in this post. The Hoodooist and friends hit the road to tour the town for Baijiu deliciousness.

Firstly, Baijiu is an intriguing spirit, never quite becoming a permanent fixture in the London bar scene – something drinks giant Diageo is trying to change – with their signature Sichuan province ‘strong aroma’ Shui Jing Fang Baijiu. Made with sorghum, rice, glutinous rice, wheat and corn, it ain’t called ‘strong aroma’ for nothing. Neat, the scent can be detected from a mile away, a flowery aromatic with hints of rice, it tastes surprisingly different, but surprisingly similar.

Been called everything from ‘flowery’, ‘apricot’ to ‘burnt rice’ and ‘with a Maris otter barley length’, it is definitely an acquired taste. But the length and aftertaste’s similarities to scotch is undeniable. This is a smoky spirit for the harder-livered amongst us. A burnt, spicy start, with a long finish, Chinese proverbs state that it takes 300 shots to really appreciate Baijiu. The Hoodooist must admit, it’s acquired, but one he can see himself acquiring.

The perk of Baijiu Cocktail Week is seeing how various bars attempt to work with this strong, fickle spirit. Most of the cocktails this week do their best to mask the bitter-burnt flavours of the baijiu to focus on the flowery sweetness of the spirit.

Opium’s “Born on the Baijiu”

Beginning with Opium Chinatown (Click HERE for Review), who presented us with the Born on the Baijiu (geddit), which was a spicier take on their London Cocktail Week 2014 offer, the Down to the Baijiu (geddit2). Baijiu, vodka infused Oolong tea, Xilli tequila liqueur, pomegranate and lemon juices with almond syrup.

To quote my review of the drink from London Cocktail Week 2014: “The Baijiu was unmistakable and the opener to the drink, followed by a citrus and almond sweetness. The oolong followed immediately behind, ending on the tequila. This incredibly sweet, but not sickly so, was pleasant and nagged me with a sense of nostalgia until somebody finally yelled “STRAWBERRY LACES!”, which is essentially what it tastes like – scarily similar. I would love this as a dessert drink, with its light mouthfeel and short serving.”

This time there the chilli tequila liqueur was more present, the spiciness hitting the back of the throat harder, the opinion around the table was split regarding the chilli. Personally, I enjoyed the chilli, but the drink came off a bit sweet for me. I still suggest it as a must try drink, at least once, rather enjoyable. 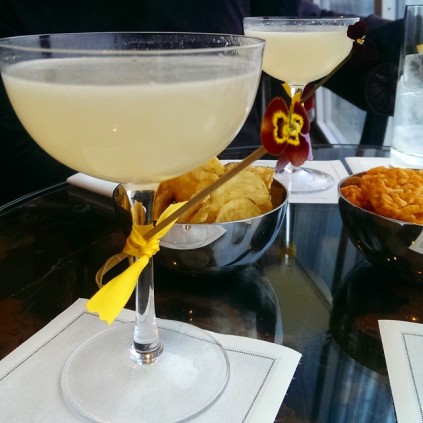 Our experience here was… mixed. Though service inside the bar was excellent, getting in was bizarre. First, we are asked if we had spoken with the bouncer’s “colleague downstairs” – now we spoke to many employees downstairs – who seemed utterly confused regarding the opening times of the bar (“But they’re not open till 5.” Hoodooist: “I assure you, they are open.” And Lo, they were open) – but none that wanted our names and titles and reservation times and inseam length and national insurance number.

She still seemed rather unsure of letting us in to this utterly empty bar populated by only two drinkers till the article was mentioned, so I would hardly suggest service was at all in favour of the patron, but entirely in favour of the bar’s ego. And long-time readers are fully aware of the Hoodooist’s opinion when bars favour themselves over the customer.

So far, everything was very….Shard.

For the next hour, the bar was still empty (read that as you will), so the eerie silence provided a quiet moment to try the Lucky Goat.

The Hoodooist’s friend looks up incredulously and states “Is it just me or does this smell like a Vento d’Estate?” Which is does. Eerily. Mimicking the Treviso hay-cheese, the herbaceous nose is surprisingly contrasted to the flavour of the cocktail. As with most Baijiu cocktails, the Shui Jing Fang stands out the most, followed by flowery sweetness of the Tanqueray botanicals and powerful Prucia Umeshu. An honest and decent drink, but bit lacking in character.

It’s mid-afternoon, and the Ping Pong dim sum chain presents us with its Longan Baijiu Firecracker! A dramatic name for sure, and it keeps in with Ping Pong’s cocktail tradition of easy drinking to go with a meal. Very easy drinking. This is a sneaky one. And very sweet, but keeping in the flowery theme we’ve seen so far. Baijiu, Grey Goose vodka, St. Germain elderflower, Hana Lychee sake, rose petal syrup, Longan juice, lemon and egg white, garnished with string of caramel.

With 35mls of vodka against 10 of Baijiu, the Chinese spirit is toned down here a bit, but still a demanding flavour. Alongside the powerful rose syrup, it is followed by the lychee and a soft elderflower finish. Very soft, velvety in texture. Relaxed and refreshing, this drink.

Sure enough, we wanted something a bit stronger to perk us back up, the Hoodooist finds himself at W Hotel’s Spice Market for their nameless drink her shall call the Baijiu Martini since the recipe for the Baijiu ‘Yuzu Martini’ was altered at the last minute. Mixed in with Pernod absinthe, D.O.M. Benedictine, gin and lemon, you’d be surprised by this drink. Powerfully citrus, but not overwhelmingly so, the herbal nature of the Benedictine is a great balance for the Baijiu. After the initial burnt-baijiu, the liquorice kick of the absinthe is a fun surprise, with the botanical length from the gin.

One’s first suspicion was that the drink would be overly citrusy, but turned out well-balanced, and very enjoyable, balancing out the burnt-bitter flavours of baijiu.

The drink could best be described as mellowing the baijiu enough to drink it, while appreciating the entire range of flavours it presents when drunk neat – which is what made it unique through the day where other bars attempted to mask aspects of the drinks to suit the cocktail. The nectar and hopped grapefruit bitters contributed to a silkier mouthfeel. Surprisingly, one tasted the bitters more strongly than the elderflower (Thankfully, I think).

A great way to really get into Baijiu without throwing back a shot of it.

Our final stop for the night: Salvatore’s Bar at the Playboy Club. The Baijiu Affair: Baijiu, gin, Green Chartreuse, Maraschino liqueur, raspberry puree and lime juice. Well. Felt it was the weakest drink of the night. Across the table, rating this went from as low as 1.5 to 3.5 out of 5, so opinions rather vary. Very much a Last Word gone awry, one must keep in mind that drinks like the Last Word, though challenging, work for a reason, and sometimes messing with them has consequences. This was one of those consequences. Maybe lemon instead of lime would have helped, but not by much.

Overly citrus with clashing flavours, pulling a sour face and only drinking half of it is all the Hoodooist could manage, really. But again, opinions varied across the table. At 15 pounds, one would expect a more deserving drink for the price.

But another round of Salvatore’s other drinks from their menu helped sort that out, so the night ended on a positive note anyway!

6 bars in, get thyself an Uber.

Baijiu Cocktail Week is certainly one of the more enticing events of the London drinks scene, and it’s always good to see a spirit break through in London. Though an acquired taste neat, it probably is best drunk that way between courses of a tradition Chinese meal, since it’s use in cocktails is incredibly challenging (as highlighted by the Spice Market bar manager with the number of recipes they waded through).

However, the various bars did show how different aspects of the complex spirit can be highlighted with the right ingredients. Bo Drake showed us a palatable way for newbies to enjoy the entire spectrum of the spirit’s complexity. Ping Pong presented a soft, silky cocktail emphasising Baijiu’s sweeter flavours; whereas the Spice Market had the burnt-bitter flavour balanced and softened with its citrus and herbal cousins.

Certainly a complex drink that demands further study in the London drink scene, I wish you all a fantastic Baijiu Cocktail Week and Happy Chinese New Year!