How does whisky figure into Soho’s iconic vinyl store? Aberlour has worked with collector and restorer Bill Bollman to bring to Phonica one of the last two working early 20th Century Voice-O-Graphs! 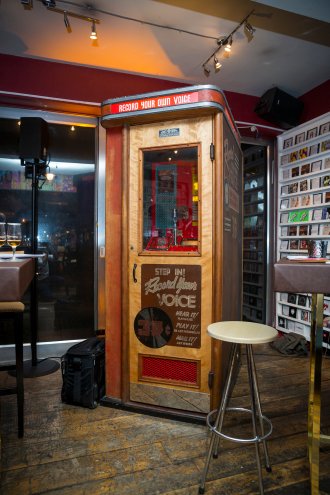 A piece of living history, “The booth in question has been extensively restored by Bill, and the wood panelled sides and interior are steeped in history- like casks of whisky maturing in a warehouse.”

“The vintage 1947 Voice-O-Graph is far more than simple novelty, or an archaic piece of recording history, but an item made from experience, the walls soaked with the memories of those who have used it.”

Booths once house in arcades and diners across the USA, the Voice-O-Graph records a minute long message in the booth to print recordings of everything from simple messages, toasts, birthday messages – to more poignant prayers and love sent to children at war overseas, with the most common war-recordings being of variations of ‘You Are My Sunshine’. History, memories both joyful and moving, emanated from the still functioning machinery that once were common in North American scenery.

Before we have a closer look at the Voice-O-Graph, Aberlour International Ambassador, Alex Robertson, and spirits writer, Neil Ridley, walk us through the Aberlour expressions that scored an impressive gold medal each at the International Spirits Challenge 2014.

After a spectacularly crafted Old Fashioned, the tasting begins: a multisensory experience, Aberlour’s night at Phonica paired each whisky to vinyl tracks.

Beginning with the Aberlour 12 year (Double Cask Matured), a light, red apple nose opens to a palate of similar fruit along with classic toffee, followed by a wash of rich chocolate – ending with a warm cinnamon and ginger finish. A very Autumnal, fitting, dram this season.

After that delightful whisky, the 16 year (Double Cask Matured, gold medal winner at the San Francisco World Spirits Competition 2015) was paired with the gorgeous vocals and choir of ‘Shine On’ by Tallulah Rendall. A creamier whisky, its nose is packed with raisins and even a floral character – a fantastic balance of the double wood casks. The palate is smoother than the 12 year, full with plum and raisin sherried flavours balanced against spicy, floral flavours.

Now the 18 year (Double Cask Matured, gold medal winner at the 2014 International Wine and Spirit Competition) is a massive step up from the 16 year (for the Hoodooist anyway): A gorgeous nose of butterscotch, vanilla icecream, toffee and peaches. The palate opens with cream and stone fruit, and gradually unveils darker, heavier flavours with oak and leather, with a vein of honey running through – ending with a long, warm, sugared finish.

Not expecting that beautiful whisky to be outdone, one was surprised what a stunner the final Aberlour A’bunadh (double gold winner at the San Francisco World Spirits Competition 2015) was, served along with the resonating voice of Johnny Cash. A classic sherry-heavy whisky, the Oloroso butts impart those orange and Xmas spices notes to the nose. The palate is indulgent, and wintery – dark chocolate, cherries, lots of dry fruit and warm spice. Being cask strength, the finish is powerful and lasting, bittersweet and spicy. A favourite. Adore this whisky.

Concluding the tasting, musician Johnny Flynn takes to the Voice-O-Graph to record an upcoming single, printed onto disc with the Voice-O-Graph’s distinct graininess and vintage nostalgia (a song I’m looking forward to hearing again).

Entering the Voice-O-Graph himself, the Hoodooist is overcome with a feeling of nostalgia for a time he’d never known himself (heavens, this sounds so pretentiously Lynch) – but the sense of everyone that had been in that booth, recording everything from a birthday song to a prayer to hear their son come back home from the war was overwhelming. Especially after hearing a message from a mother to dispatched son just moments earlier.

A unique, unmissable experience that recording on one’s phone cannot be compared to.

In a few moments, holding the recorded disc in one hand, and a brightly sherried Aberlour expression in the other, this was an experience he was glad to be a part of – and you can too!

The Voice-O-Graph has taken up residency at Phonica Records this October 2015, where consumers have the opportunity to enjoy a dram of Aberlour 12 Year Old as they record their experiences on the Voice-o-Graph instore at Phonica Records during the following times for as long as daily vinyl stocks last:

Fruit, chocolate, spice in a dram, inside a piece of living history – this is an experience that absolutely cannot be missed this Autumn season. Enjoy what is #MadeFromExperience with the Voice-O-Graph and Aberlour Whisky this October at Phonica Records, Soho.

Your future vinyl-owning-self will thank you.