From street food stalls, to pop-ups and supper clubs, Native has finally made it. Tucked away in a corner of Neal’s Yard, Covent Garden, this seemingly unassuming restaurant has caused quite a stir within its first month of opening.

River Cottage trained Ivan Tisdall-Downes, and Wimbledon Tournament falconer Imogen Davis, spearheaded this production as food and front of house along with head chef Jack Botha. Native is taming the wild by focusing their menu entirely on game and arranged ingredients-sustainability is key, even receipts are emailed to customers. Whisky is organic and cocktail ingredients are foraged and home-made. Familiar simplicity meets contemporary innovation here at Native.

This former bread shop is pretty cosy, seating eight upstairs and about 20 below. A minimalist design might seem a bit stark at first but soon you realise how it complements a smaller space, and focuses attention on various other senses. The scent of lilies wafts through the venue when you first enter and is immediately followed by the fragrant herbs and sizzling meat from the open plan kitchen.

Said kitchen is overlooked by the chefs table, a counter that opens directly to the kitchen where one can interact with the staff as they work (if you’re lucky enough to book one of those four seats, I imagine reservations are already filling up pretty quickly). A fantastic spot to observe everyone’s meals as they’re plated, as you decide which you’d rather go for. And the occasional treat from the chefs is always welcome-not to mention the very Instagramable lighting!

Hell, all the food here is Instragram ready.

Like the cuisine, the cocktails and their flavours revolve entirely around seasonality. The cosy venue does mean however, that the cocktail list must be kept short and simple. Very short in this case, two cocktails long, with a choice of eight wines and two beers.

Awaiting our first course, we begin with an Elderflower Bellini, and a Sloe Gun. 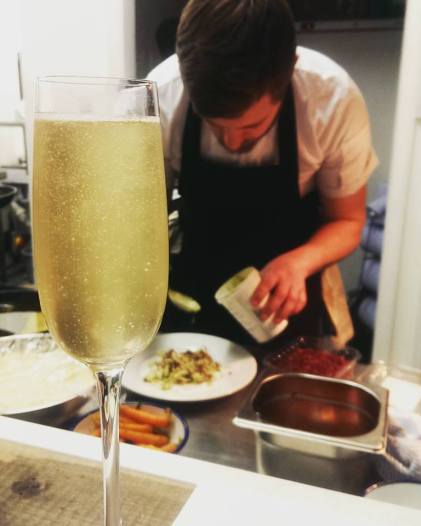 The home-made elderflower syrup for the Bellini was, of course, prepared with foraged elderflower-the final cocktail being sweet with a delicate floral flavour, but also with a surprisingly spicy kick. I highly suggest this as a fun twist on the Bellini, and as the less sweet of the two cocktails.

The Sloe Gun, prepared with East London Dry Gin, sloeberry syrup and Prosecco, is quite on the sweet side, with a long lingering fruit flavour. Personally, I felt the long finish tended to interfere with the beautiful starters-but it does not take away from being a decent drink in itself.

Quizzing Jack and Ivan about future cocktail ideas (and hopefully something a bit drier) the subject of an Apple and Sage Old Fashioned came up – which the Hoodooist personally hopes will be smoked with Applewood (fingers crossed!). Native could probably entertain the ideas of bottled cocktails as they have become increasingly popular in London.

The first order to roll in, the Wood Pigeon, on beet hummus, pickled cabbage, and pitta bread with Harissa. The rich, sweet flesh of the wood pigeon contrasted beautifully against the beet hummus and cabbage; all the while managing to remain a bright and lively dish. Although the Hoodooist doubts it could compete with the Palourde clams in hot smoked pork belly broth with wild garlic. Like the previous starter, it manages to remain quite light regardless of how rich and flavourful the broth is. Hearty, homey, and well suited to the environment. 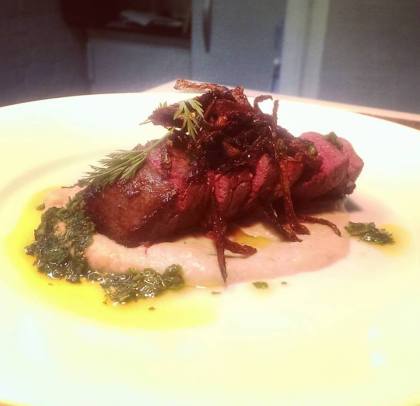 A glass of red Sicilian Nero d’Avola accompanies the Venison haunch steak, topped with crispy onions and Salsa Verde, on a bed of cauliflower purée. Halfway through this main we realised we were getting rather full, but there was no way we could not finish this gorgeous medium rare hunk of venison. The deep, gutsy steak is brought alive by the occasional bright sparks of flavour from the Salsa Verde, their texture is contrasting with the crispiness of the onion.

And there was no way we were leaving without dessert. Rhubarb and rosemary on meadowsweet cream scattered with coriander honeycomb. Just gorgeous. The fragrance is incredible, the meadowsweet in the cream almost like vanilla. The rosemary provides a very subtle contrast of the rhubarb, and the coriander seed is similarly subtle, but effective. Saving a piece of honeycomb for each bite, you start to notice the cream being sustained around the edges of the honeycomb as it melts into its surroundings.

Lincolnshire Poacher, with rhubarb chilli pickled pear on English quinoa crispbread is a more savoury alternative, paired alongside a dram of Highland Harvest Seven Casks scotch – an organic single malt with distinct fruit notes and creaminess, surprisingly smooth, with bit of a bite. 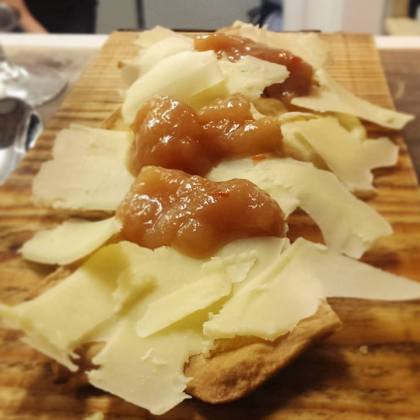 Service at Native is impeccable – incredibly swift, and being seated at the counter allows you to have chat with the staff as the show keeps an eye at your pace, so nothing comes either too quickly or too late. Ivan and Jack managed to keep their cool in the kitchen at the busiest of times and amazingly still make time for customers seated at the counter, and Imogen is wonderfully conversational as front of house, keeping the show running smoothly.

The fact is, Native is exciting. Its focus on sustainability and foraging, means that menus can sometimes be unpredictable, and feel improvised almost – in the best of ways. The rustic decor extends to the feel of the food even though they are presented so beautifully – and prepared with incredible precision and skill behind the kitchen counter. The Hoodooist has to admit that Native comes as a refreshing change and massive improvement on what has otherwise been a fairly dull year in the food industry so far.

One can only hope that more restaurants will recognise the importance of skill and imagination over pomposity. Consider me a fan of Native, and fight me for the counter seat.